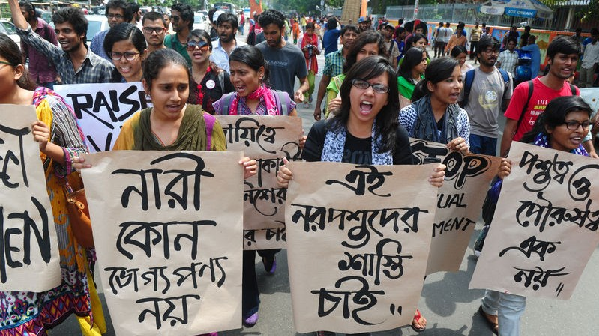 It is no longer uncommon to read news or be victimized by eveteasing. Although the High Court passed a law in 2010 that labeled eveteasing as a sexual offense and committed the guilty party to jail or imposed a fine – the phenomenon has only gotten more rampant over time. The lack of immediate action, dilemma over its source and outcomes, and most importantly, our gradual tolerance towards the matter has all contributed to brewing an already warm soup. What we fail to recognize is something as heinous as eveteasing is built into the very fabrics of our culture, our families – and without persistence, it can never be completely removed.

In a quest to get a deeper insight into the matter, an independent anti-eveteasing group recently conducted a survey to identify the realities behind the issue. Of the thousand plus participants who responded to the survey both online and offline, it was found over 90 percent have either been victimized or seen somebody getting eveteased. Furthermore, the statistics revealed that most of these incidents (more than 70 percent) occurred in broad daylight, particularly around noon and took place regardless of location and age. These primary statistics were then unveiled to an audience in Facebook, Twitter and universities, and unsurprisingly, a large group of people blamed women for wearing ‘loose’ or ‘loud’ clothing that provoked eveteasing. That’s when things got really interesting. A second part of the survey revealed that over 80 percent of the incidents occurred to women dressed in salwar kamiz, which is our natural, casual and cultural clothing. In addition, a startling 53 percent reported wearing burka or hijab – so clearly, covers or no covers, it seems there is no escaping eveteasing.

However, it isn’t these numbers that caught my attention. It is the fact that of the thousand plus respondents, only 33 percent are female. Pardon me for my rash conclusions – but that particular data says a lot more than any of the aforementioned figures. It indicates women are still not comfortable talking about eveteasing while a significant percentage still blame themselves or are blamed by their families for provoking it. To me, that’s the problem – not eveteasing.

For centuries, women have been objectified as the ‘weaker’ sex. Religion is often misinterpreted to fuel such prejudices and the fabrics that bind our civilizations actively practice it. While women and men have different roles, it cannot be denied they are equally important to catalyze the progress of nations, to continue evolution. What has always been in debate is equality, but often what misses out is the concept of equity. Women’s primary role may be to hold families together and give birth to children, simply because they do a better job at it than men – but essentially, their roles are not limited to it. Women can be entrepreneurs, engineers, politicians, or virtually take any role that a man is proclaimed to be designed for. In the same vein, while biologically we cannot have pregnant men, their roles are not limited to economic gains, but can essentially be about raising children and holding the family together.

So, where does the problem lie? Why do television shows always show a mean man with three wives beating them up or a weeping woman grieving over the color of her skin? Why is it popular to show women worrying about which detergent to buy, and not women getting excited about which brand of car she’ll drive to work the next day?

There are a million explanations to it and a trillion agents that cumulatively play important roles to support each explanation. However, the heart of every explanation comes down to our families. How are our parents raising us? Are they treating brothers differently from sisters? Is it dangerous to let our daughters play in the field, while embarrassing if our sons don’t play at all? My father bought me my first bicycle and taught me how to cook khichuri. My mother taught me how to keep track of money and paid for my violin lessons. My brother is a brilliant cook and an incredible football player. We grew up getting the same opportunities and neither of us was allowed to stay out after sundown. After a while, we decided where we wanted to head with these opportunities.

I don’t if that is a perfect example, but it seemed to work for us. What we were taught through all this was how the branding of women needed a serious jolt and there was nothing called the ‘weaker’ sex. It’s perhaps a more specialized sex, but certainly just as important as anything else. Popular modernism debates biasedly on how bikinis are more progressive than burkhas, while it should essentially debate on how the idea of man and woman needs to change in our society. That’s what needs to change – our ideas, our debates, and our minds.